It is a first concert featuring works of mixed music (music with acoustic instruments and electronic devices that interacts). These works are pieces whose electronic devices have been developed with real-time free software (FAUST and SuperCollider). They are played by regional musicians and students from Saint-Etienne.

1. SmartMachine musicale (20’ – 2017 - Création)
With the students of La Salle secondary school (Saint-Etienne), Robert Chauchat, music teacher, Roméo Monteiro, percussionist, solist from Ensemble Orchestral Contemporain and Gérard Authelain, teacher and musician (GRAME) :
Guided by their teacher and musicians, the students have explored the relationship between the technical object and the musical creation, but also the musical gesture (using the Smartfaust apps for smartphone designed by GRAME, National Center of Music Creation in Lyon). They have gradually created a new kind of sound scene, halfway between a performance and a visual installation. They invite you tonight to discover a space of research, questioning the aesthetic of the concert, the musician’s attitude and his instrument!
Project conducted by a partnership between GRAME and Ensemble Orchestral Contemporain, with the support from DRAC Auvergne – Rhônes-Alpes and the Department of Loire.

2. Smartbones (20’ - 2016)
With brass section students of the Conservatory of Valence (Léane Berthaud, Alice Chakroun, Noam Leenhardt, Rami Leenhardt, Meryem Ouannas, Antonin Vinay) and Pierry Bassery, musician and teacher:
In order to arouse the curiosity and the listening, the students of the conservatory of Valence, guided by the trombonist Pierre Bassery, combine repertoire, improvisation, creation and new technologies with pieces for trombone/tuba. The incorporation of smartphones on the instruments allow the musicians to play with Smartfaust apps as the continuation of the instrumental gesture. Thus these new instruments (“Smartbones”- smartphones & trombones) will generate a sound material that will lead the students to imagine choreographies in which dance, trombone and electro will be mixed and confronted.

3. Peyote (16’ - 2016) by Sébastien Clara, mixed music for trio & electronics
With Alice Szymanski, flute, Justine Eckhaut, piano et Florent Coutanson, saxophones.
In 1936 Antonin Artaud left Europe to travel to Mexico. This departure symbolizes his break with surrealist aesthetics. "The rationalist culture of Europe has gone bankrupt and I have come to the land of Mexico to seek the bases of a magical culture that can still spring from the forces of Indian soil." However, by a romantic desire to touch the bottom or a personal inner experience to better understand his fellows, Artaud undertakes "a descent to come out of the day", a journey within his journey, a transcendental abysm. Artaud sets out to research "the ancient solar culture". To do this, he wants to be introduced to the culture of the men and women of the Sierra Tarahumara.
Peyote retraces the dances of the Tarahumara to the glory of the sun, which undeniably influenced the work of Antonin Artaud.

Elena D’Alò, flute.
Song#01 was one of the first musical attempt to compose a piece specifically for S.T.One (Spherical Tetrahedral sound diffusion) The composition ideally develops its path from the end point of Sequenza I for flute by Luciano Berio, a search of polyphony with the most monodic instrument of history, as the composer said. Starting from this last point, in Song#01 it has developed an instrumental path going in the polyphonic attitude of flute, deeply; first, the overlapping of musician singing and normal sound, then continuously changing the role of one in the other and finally solidifying everything in complex layers of multiphonic gestures. The sound paths of the flute are a direct derivation of the electronic part of S.T.One, obtained subtracting some melodic and harmonic areas from the spectrum. Then, these areas are developed and read from the instrumental point of view. The whole electronic part is exclusively composed of sound engineer Piero Schiavoni's processed voice.

Danilo Perticaro, saxophone.
PHASOR is a work for alto saxophone and electronics. The electronic sound comes from two S.T.ONE (Spherical Tetrahedral ONE) systems. S.T.ONE is a tetrahedral louspeaker with one transducer on each face.

It is a concert of electronic music with musicians coming from the USA or from various European countries. They will play works, mostly experimental, realized with diverse and innovative digital devices, all involving Open Source software.

1. Pointillism (20’ – 2016) by IOhannes m zmölnig
(Institute of Electronic Music and Acoustics - University of Music and Performing Arts - Graz – Austria)
Pointillism is a solo live­coding performance in Pd. Both the code representation and the generated audio use “points” and “dots” as building blocks: the music is generated using morse code patterns, the code is written in “Braille” (the dot-­based writing system especially designed for blind/visually­impaired people).
The performance is an ironic statement on the popular “show-­us­-your-­screens” paradigm, by presenting the code in a form that does not even pretend to be readable. 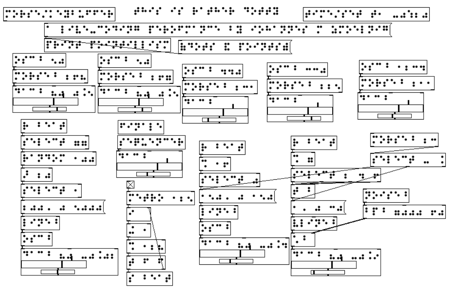 2. Seven Sphere Journey (12’ - 2016) by Broch Vilbjorg
(Anti-Delusion Mechanism - Netherlands)
Music for computer generated sound, voice, dance and video projection
This project explores generative sound, graphics and algorithmic composition based on the octonion algebra. The octonions form an 8 dimensional normed division algebra. The project started 2016 and and is in ongoing development. The octonions are an extremely rich subject within mathematics, with symmetry relations to Lie algebras and not the least to the so called special Lie groups.
The unit-length octonions trace the seven-sphere: S7 - a 7 dimensional surface in 8 dimensional space. The project explores orbits in 8 dimensional space for audio synthesis and graphics.

4. 5-HT_five levels to zero (28’ – 2016) by Tina Mariane Krogh Madsen & Malte Steiner
(Block4 - Germany)
For Linux computer with Pure Data, synthesizer, div pedals and instruments for noise
The concert 5-HT_five levels to zero is based on the structural qualities of the neurotransmitter serotonin. The dynamics of the molecule will be improvised and performed live in a dynamic and counterbalanced noise act that deals with both the balances as well as the imbalances inherent, resulting in chaotic states caused by disruption of this unit in the brain. For the piece, TMS has created a score that captures the dynamics of the musical composition, where the audio will be accompanied by a projection of a visual score created in Blender and Pure Data. 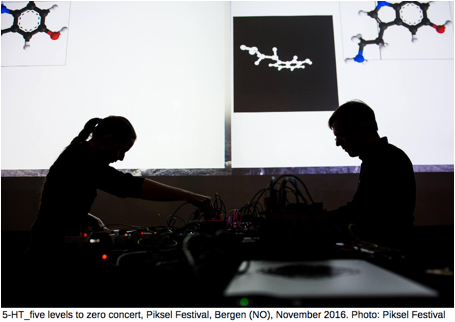 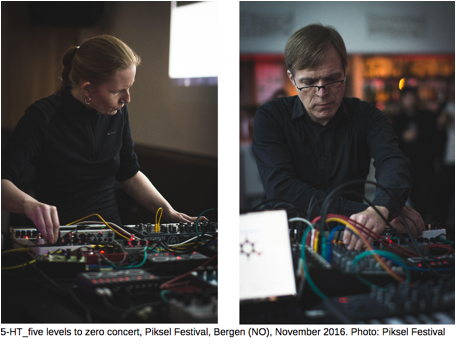 6. The Infinite Repeat (22’) by Jeremy Jongepier
(linuxaudio.org – USA & MOD Devices - Germany)
For guitar, computer and voice.
A musician with over 25 years of experience and a computer with Linux. That's what it boils down to. The result: conventional, solid song-writing, with an eclectic tinge because of the choice to not walk the threaded paths coupled with an auto-didactic background, an outspoken personal taste and an open-minded world-view.
This year The Infinite Repeat will be all about going back to the roots and mixing that up with the latest Linux based technology. So expect some solid acoustic singer-songwriter material with a modern touch and a Linux device on the floor.
See http://theinfiniterepeat.com

1. Voce 3316 (3’ - stereo), Massimo Fragalà, Italie.
All the sounds that form this composition derive from the elaboration of vocal syllable. Starting from this very small sample (0.31 seconds) I tried to change the original characteristics in order to generate a range of sounds more o less different compared to their original variety. This was possible using particular technique of sound processing such as spectral time stretching, morphing, freezing and sustaining a sound on an explicitly specified grain, transposing copies of sound on top of one another, etc. .
This composition has been realized on linux kxstudio.

2. Kecapi III (10’56 – octophony), Patrick Hartono, Indonesia.
Kecapi III is the third version of electroacoustic piece called Kecapi, which I started in 2012. Each of versions has different approach and idea but, still based at the same raw material which is recorded sound of javanese sitar/kecapi.
The sound material is later being processed through granular synthesis technique, which then generates stable texture of grains sound, change of timbre, sound spatiality compared to the previous versions.
The ambient of grains sound with gradually spatial changes in air is commonly occurs in Kecapi III. Nevertheless, the sudden change of timbre and chaotic spatiality also occurs in the middle part of the piece.

4. Profon (7’ – 16 channels), Magnus Johansson, Suede.
A collection of flower pots moved by PlayBuf in time and space. The recorded flower pots were polished in Eisenkraut sound editor, the composition was written in Vim and realized with SuperCollider for 16 audio channels at EMS, Stockholm, in the winter and spring of 2017.
Magnus Johansson is a programmer and composer, active at Elektronmusikstudion (EMS) in Stockholm, Sweden. He mainly works with algorithmic compositions based on field recordings and open source software.

5. Dark Path #6 (5’ – stereo), Anna Terzaroli, Italie.
This piece is a part of the “Dark Path” series, a collection of soundscape compositions. This electroacoustic music focuses on sound marks of a sonic landscape. It embodies a sense of history beyond itself. Beyond the analysis of the used recordings, there is a history that is personal. The piece aims to examine and explore the transformative possibilities of the computer music.

8. Production miraJe (10’ - stereo), Bernard Bretonneau, France
Bernard Bretonneau has a musical career that combines autodidaxy and composition studies in electroacoustic music at the Conservatoire of Lyon with Denis Dufour. He taught acousmatic music in the Rhône-Alpes region with adults and children, and developed improbable music instruments workshops in music schools. After a period of management (in music schools and in Dance and music departmental organization) he is now a trainer at the Pont Supérieur in Rennes.
Production miraJe offers sound installations for those who want to play with sounds. These sound installations invite to improvisation and composition. We support the teaching teams in the thinking and the implementation of these devices.
For the occasion two sets of short pieces have been combined in the form of a vague sequence:
1son1image:
Originally a game with constraint, take a picture among the photos I make, make a video work and a sound editing, one per day to compose.
https://www.youtube.com/channel/UC4kw8GoE1ZCy1JNPvjapwWQ
The instructions distributor:
A series of improvised game instructions for those who want to play with sound. They are inspired by the work of Alain Savouret. Appreciated by the students, sometimes less by the professors ... Originally they were made for a sound installation at the conservatory of Vannes (56).
https://www.facebook.com/productionmiraje/
For the realization: Ubuntu 14.10 to 16.10 / Reaper (under wine) / Kdenlive for the video.

9. CONCRET X (5’ – ambisoniX), Jean-Marc Duchenne, France
CONCRET X: where the author stands out as test almost initiatiX to compose on Linux with PanoramiX this kind of aftereffect in ambisoniX, more chaotiX than stochastiX, of the famous IANNIS XENAKIS'S Concret PH.
Ingredients: charcoal, hot soot in its stovepipe (recordings realized with a microphone Sennheiser MKE on 2002 and a portable DAT in the 90s), Panoramix (thanks to the IRCAM for this free version), Reaper in native version for Linux, Ubuntu Studio 16.04.
http://sonsdanslair.free.fr/telecharger.htm#sources_ouvertes.